History In The Making

Built-in the early 1950s, the Park Forest Plaza made history and national news. Shoppers, planners, tourists, and reporters flocked to see this phenomenon – a regional shopping mall. Anchored by three major department stores, the mall featured groupings of small stores clustered around an open grassy area. From Park Forest, the developer, Phil Klutznick, moved on to develop Old Orchard, Oak Brook, and Water Tower Place. But Park Forest was the pioneer, the model.

The Village purchased the Park Forest Plaza in Dec. 1995 and, once again, made national news with its program to convert the former mall into a traditional, mixed-use, "Main Street" downtown. 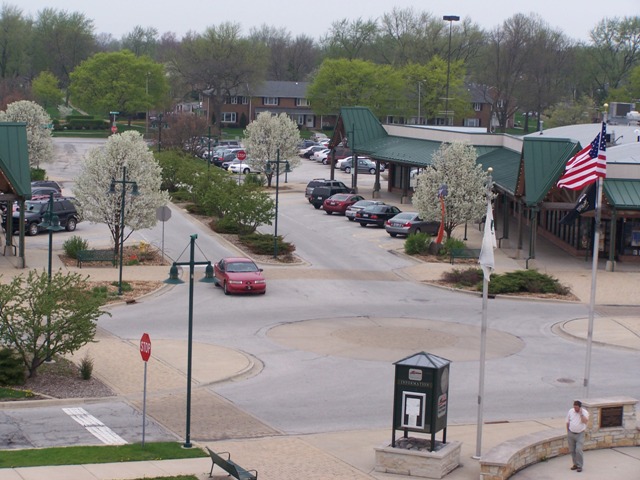 Conversion to a Traditional Downtown

The first step in the redevelopment process involved the demolition of over 300,000 square feet of vacant commercial space, including two of the former anchor department stores. A new grid road system through the former grassy mall has been created. The new east/west street has been named, appropriately, Main Street.

A major step in the conversion from a mall to a downtown was the sale of individual parcels and buildings. The first new construction in the DownTown was a new Walgreens on an out lot. Two of the DownTown buildings have been sold. Moshe Wolf owns Building #2, which houses a theatre and smaller units. Blaine Realty is the owner of the previous Chase Bank Building. CVS Drug Store is located on a former parking lot on the corner of Main Street and Western Avenue. There are two senior complexes that have been built on the east side of DownTown. Victory Center Senior has both independent and assisted living. In the fall of 2005, Bigelow Homes built 63 homes in the Victoria Place development on the west side of the DownTown.

Another major step was the creation of a market niche. As a historically cultural community, the local market niche was culture. One of the retail buildings has been converted into a cultural arts center. It houses Theater 47, Tall Grass Arts Association Art Gallery, and School. It also houses the administrative offices and board rooms of the Illinois Philharmonic Orchestra. Franciscan’s medical office is also in this building. Salon Artists Gallery is another art venue located at 294 Main Street.