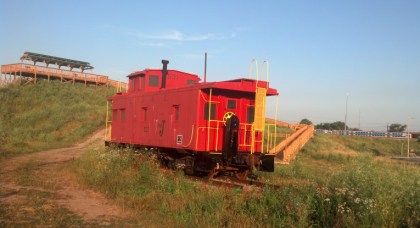 Acquisition of the Elgin, Joliet and Eastern Railroad (which travels east and west through Park Forest) by the Canadian National Corporation was a big news item in the Chicagoland area. The EJ&E crosses under the north-south Metra Rail line at a site adjacent to Park Forest’s commuter parking lot. A 4 acre undeveloped parcel owned by the Village had remained undeveloped. In order to accommodate rail movements from E-W to N-S, CN has constructed a major railroad intersection on half of this parcel. This project is best described as a “highway cloverleaf interchange for trains”. There exists a grade separation of over 25’ between the existing EJ&E line and the Metra line (owned by CN). This rail intersection is unique in the US. The Park Forest Rail Fan Park is currently under development. The well known Old Plank Road Trail (22 mile rails-to-trails project) runs from Park Forest to Joliet on the opposite (North) side of the commuter lot. The key element of the park will be an accessible train viewing platform 35 feet high so as to view the various train movements. There is projected to be at least 32 trains passing through this site daily.

In addition to spectacular views of the train movements, the plan is for the park to be a destination to tell significant historical stories. A railway caboose was recently installed as a special feature at the park. A variety of interpretive signs and displays are also under development in comfortable rest areas on the boardwalk and throughout the park. Stories to be told include “the role of railroads in the development of the Chicago area”, “the story behind the name Old Plank Road Trail”, “the story of the CN Rail intersection” and maps displaying the Old Plank Road Trail and its many connections. A scanner to be installed at the viewing platform will monitor communications between train operaters and dispatchers. The park landscape will all be native to Illinois and depict what one would have seen on a train ride through Illinois 100 years ago.

The corner stone of the park will be a 500 foot long ramp which will traverse an earth mound to the viewing platform 35 feet above the park. A trail from the ramp will connect to nearby Holden Park and to the Old Plank Road Trail. The Park Forest Rail Fan Park will become a major tourist destination for train buffs throughout the United States.